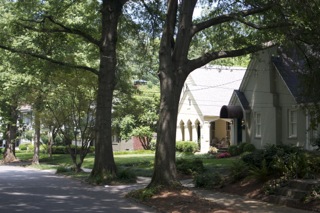 Brookwood Hills Historic District is a distinctive and well-defined residential community developed beginning in the 1920s. It is a remarkably intact example of an early 20th century planned residential community, with very little detraction from overall historic character. Bounded by Peachtree Road to the west, the Southern Railway line and Interstate 85 to the southeast, the BeltLine to the north, and Clear Creek Nature Preserve to the east, and with only two entrances from Peachtree Road, Brookwood Hills is a “pocket-enclave” community within a dense urban setting. Following on the heels of other successful suburban developments such as Druid Hills and Ansley Park, Brookwood Hills incorporates many of the same elements as these earlier neighborhoods, such as curvilinear streets, use of the natural topography, and informal landscaping. At the same time, Brookwood Hills is unique in its rigid placement of street trees – oaks and crape myrtles – that were specified and, in some cases, actually planted by developer B.F. Burdett. A large area at the center of the neighborhood, originally the site of a spring-fed pond, is devoted to recreation, and features a pool, tennis courts, and a clubhouse, alongside an undeveloped wooded area. Houses in Brookwood Hills vary widely in style and scale, reflecting the diversity of early 20th century architecture. Some of the styles represented include Tudor Revival, Colonial Revival, and Neoclassical Revival, with houses ranging from one-story bungalows and cottages to spacious two- and three-story mansions. 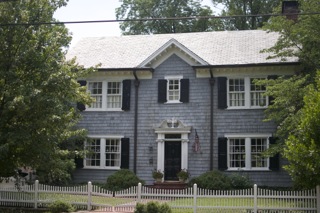 Brookwood Hills was developed on land that was originally part of the Collier estate and had subsequently been purchased by Benjamin F. Burdett, who formed a real estate partnership with his son Arthur C. Burdett. The Burdetts hired civil engineer O.F. Kaufmann, who had worked with Frederick Law Olmsted, Jr. in the development of Druid Hills, and began planning the subdivision in the early 1920s. The first phase of Brookwood Hills, comprised of lots on Palisades, Woodcrest, Northwood, and Huntington, was planned and developed between 1922-1924; the second phase was complete by 1933. Development within the neighborhood continued into the 1970s, with later houses, in general, appropriately scaled to the community. The feel of the neighborhood remains semi-rural despite its location amid bustling Atlanta development. Brookwood Hills Historic District was listed in the National Register of Historic Places in 1979.