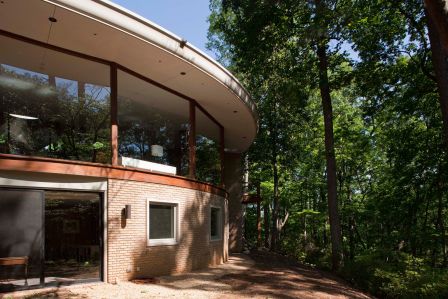 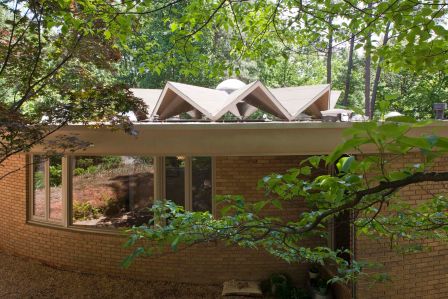 The Cecil and Hermione Alexander House stands upon a hilltop site in northwest Buckhead, surrounded by a naturalistic landscape of native trees and shrubs and outcroppings of granite boulders. The modern residence features a circular plan with an interior court at the core of its design. This central space is covered by a folded-plate roof punctuated by skylights that flood the interior space with light. Meanwhile, wedge-shaped rooms radiate outward from the central court. The rooms on the northern and eastern portions of the home feature curved floor-to-ceiling plate-glass windows, while three-part picture windows punctuate the western wall of the home. A wing extends from the southern portion of the main house and contains the carport.

The home was designed by Cecil Alexander, one of Atlanta’s most prominent modern architects. Alexander had studied architecture at Georgia Tech, Yale University, and the Graduate School of Design at Harvard University, where he studied under Walter Gropius and Marcel Breuer, two of the leading proponents of modernism. Alexander began his career in Atlanta in 1948 with the firm Toombs and Creighton and soon after formed a partnership with Bernard Rothschild. In 1953, Cecil Alexander and his wife Hermione purchased the wooded lot on Mt. Paran Road for their future home. The residence was completed in 1957 and was featured in LIFE magazine on November 11th of the same year in an article entitled, “Tomorrows Life Today: Man’s New World, Part II.” In 1959, it was featured in another national publication Progressive Architecture.
The Alexander House is a rare and outstanding example of modern residential architecture in Georgia and was listed on the National Register of Historic Places in 2010 for its architectural significance.

View a clip from Buckhead Heritage’s Oral History Project of Cecil Alexander describing his inspiration for the Round House: