In 1838, Henry Irby purchased 202 ½ acres surrounding the present intersection of Peachtree, Roswell, and West Paces Ferry Roads for just $650. He soon established a tavern at the junction and a community was born!  In 1840, the Georgia Legislature designated Henry Irby’s house as an election district and in 1841, a United States Post Office was established in the small crossroads community. To learn more about the early history of the community and how it got it’s name, read Wright Mitchell’s “How Buckhead Got It’s Name: The Real Story.” 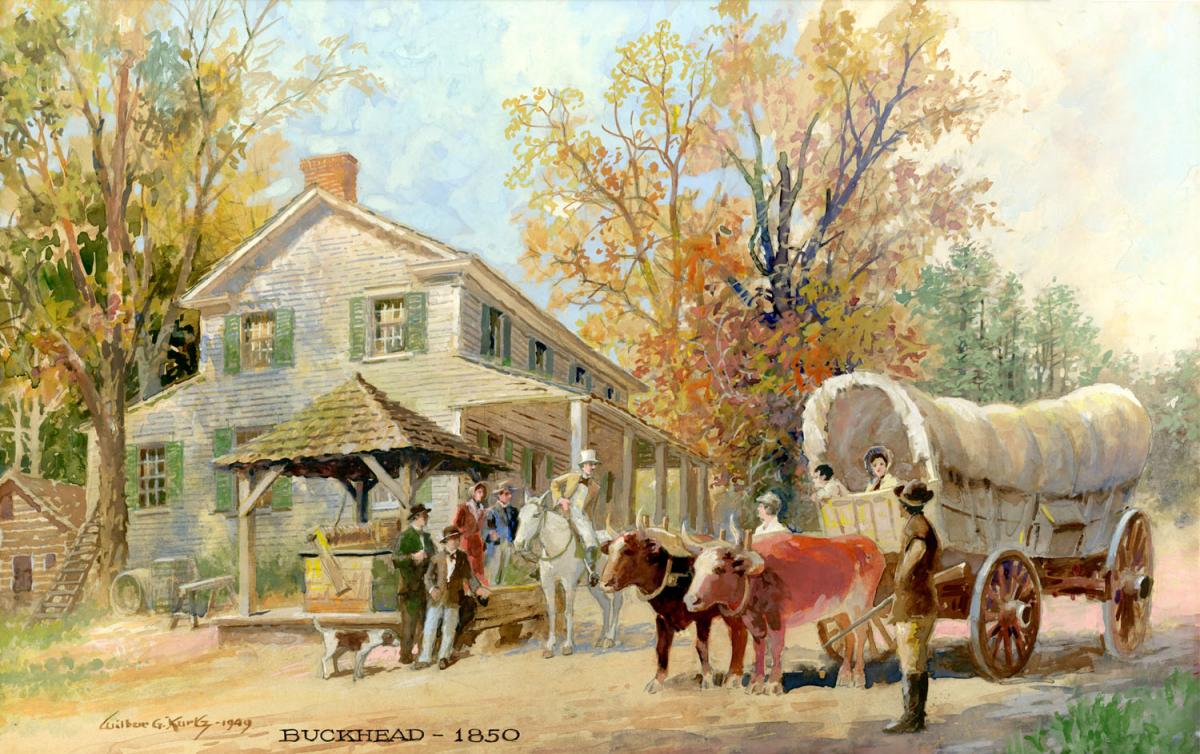 In the summer of 1864, the Civil War came to Buckhead as Federal troops advanced toward Atlanta. On July 18th, near Nancy Creek, a Confederate brigade briefly halted the progress of Union forces, but was ultimately forced back by superior numbers. The following day, fierce fighting took place near Moore’s Mill. On July 20th, Union forces were finally able to cross Peach Tree Creek, the last major physical barrier between the Union army and the City of Atlanta. Instead of taking a defensive position, General John Bell Hood, the newly appointed Confederate General, decided to charge Union lines. The Battle of Peach Tree Creek, which lasted only about 90 minutes, resulted in nearly 5,000 casualties and a Union victory. According to Civil War historian Robert Jenkins, “the Battle of Peach Tree Creek marked the beginning of the end for the Confederacy.”
During the late 19th century, the pottery industry began to develop in Buckhead because of the fine quality of clay in the area. In 1879, the Rolader family established their homestead in the southeast portion of what is now the West Paces/Northside Neighborhood. William Washington Rolader purchased 49 ½ acres and subsequently moved a one-room log cabin to the property along Moores Mill Road. His pottery business made whiskey jugs, milk pitchers, and butter churns.
Around the turn of the century, Buckhead became the site of summer cottages for Atlanta’s wealthy citizens. In 1897, John K. Ottley, the president of First National Bank, bought 150 acres around today’s Lenox property (and paid just $1,816.48 for the land!). He had a small cottage on the property for several years reachable only by horse and carriage. He built a larger estate on this property in 1913 after the extension of the trolley from downtown Atlanta to Buckhead in 1907 and the proliferation of the automobile.
Transporation advancements encouraged significant growth in the Buckhead community overall. In addition to large estate homes, the community also became home to large residential neighborhoods, including the subdivision of Peachtree Heights Park in the 1910s. Garden Hills and Brookwood Hills followed in the 1920s.
During the early 1900s, neighborhood growth spurred more commercial development. Jacobs’ Drugstore, which became an exceedingly popular gathering place, opened in 1917 at the intersection of Peachtree and Roswell Roads. In 1921, George P. Murray opened the community’s first hardware store. Kamper’s Grocery followed in 1925. The Buckhead Theater opened in 1930 and was a hub for entertainment and socialization in the community for the next two decades.

In 1952, the community of Buckhead was annexed into the city of Atlanta, which brought even more changes to the once quiet, cross-roads community. New residents and businesses migrated to the area and created a bustling city within the city limits of Atlanta. In 1956, the Samuel Roberts Noble Foundation purchased the Ottley estate and tore down the mansion on the property to make way for Lenox Square Mall, which officially opened for business on August 3, 1959. Low- to mid-rise office buildings began to appear in Buckhead in the 1960s. Then, Buckhead’s first skyscraper—Tower Place—was constructed in 1974. Today, Buckhead has over 50 high-rise buildings, almost one-third of the city of Atlanta’s total.

For permission to use the above photographs, please contact the original source noted.

Garrett, Franklin M. Atlanta and Environs: A Chronicle of its People and Events. Athens: University of Georgia Press, 1969.