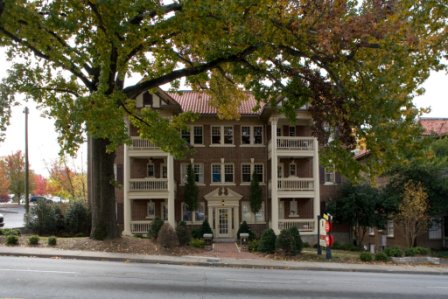 Located on Collier Road near its intersection with Peachtree Road, the 2 Collier Road Apartments was the first of several apartment buildings constructed along Collier Road.  Built in 1929 by real estate developer Henry M. Rice, the apartment building originally had 16 units. Its early residents were middle- and upper-class single professionals, young couples, retirees and widows. At the time of the building’s construction, apartment house living was rising in popularity and had become an acceptable housing option for a wider cross-section of the population.  Many of the apartment buildings being built in Atlanta in the 1920s and 1930s were of the “big house”-type. As the name suggests, these apartment buildings were built to resemble very large houses. They often blended into neighborhoods of single-family residences or were built on the fringes of such developments.  The 2 Collier Road Apartments is a good local example of this type of housing trend in early 20th century Atlanta.

The 2 Collier Road Apartments is a three-story, brick building with an H-shaped plan.  This Colonial Revival-style building has a symmetrical façade punctuated by a prominent central entranceway that is topped by a broken pediment and framed by Doric columns. Meanwhile, three-story Corinthian columns support the roofs of the building’s two projecting porch bays. In addition, the building has an exposed rusticated stone foundation, a complex roof covered with terra cotta tiles, and nine-over-one double hung windows that are capped by keystones and lintels, making the building an excellent example of the Colonial Revivial-style in Buckhead.