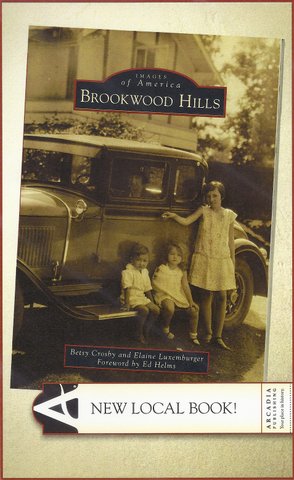 Long-term Brookwood Hills residents Betsy Crosby and Elaine Luxemburger combed library archives and the albums of current and former residents to tell the story of this unique community that has thrived for over nine decades. At the event, they signed copies of the newly published book.

This event was co-sponsored by the Buckhead Heritage Society and the Atlanta Preservation Center. Betsy and Elaine generously donated the proceeds from the book sales to the two organizations.

When Benjamin Franklin Burdett and his son Arthur developed their streetcar suburb of Brookwood Hills in 1922, they chose land on the cusp of change, straddling the city and county line. The area, once populated by Native Americans, was the site of the opening shots of the bloody Battle of Peachtree Creek on July 20, 1864. Affluent homeowners in the early 20th century made this stretch of Peachtree Street, named “Brookwood” after society doyenne Emma Thompson’s country mansion, one of Atlanta’s most elegant neighborhoods. Today, Brookwood Hills, which is listed in the National Register of Historic Places, is a leafy enclave of 350 homes within the city of Atlanta. Visitors call it an urban oasis; to city planners, it is a premier example of traditional neighborhood design. To the generations of families who have grown up in its homes, played at its park and pool, joined its clubs, and fought its battles, Brookwood Hills is something much more—it is their hometown.