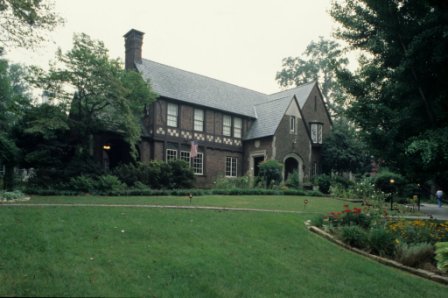 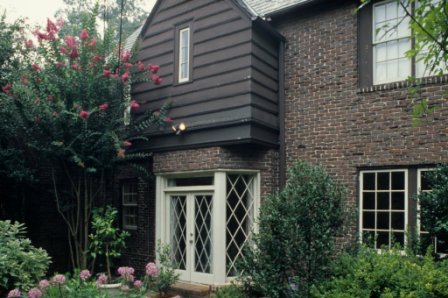 The George and Emily Winship, Jr., House is a two-story Tudor Revival-style residence that stands atop a hill in the Peachtree Heights East subdivision. The exterior of the home features elaborately patterned brickwork, half-timbering, and multi-paned windows. The home is also ornamented with limestone details, including the archways of the front projecting portico. Meanwhile, the front door is made of mahogany and weighs about 400 pounds! The house is topped by a steeply pitched slate roof.
The Winship house was built in 1925 and designed by the Atlanta architectural firm of Burge and Stevens, which had been founded in 1919 by recent graduates of Georgia Tech—Flippen Burge and Preston Stevens. The Winship House was one of the firm’s earliest commissions.
George Winship, Jr. was a prominent Atlanta businessman. He was also active in civic and educational affairs. He was the President of the Fulton Supply Company and Director of The Atlanta Gas Light Company and the Fulton National Bank of Atlanta. He also served as the Chairman of the Board of Agnes Scott College and was a member of the Board of Trustees of the Berry Schools and the Rabun Gap-Nacoochee School.
The property’s grounds were originally designed by William C. Pauley, one of Atlanta’s first trained landscape architects. However, little of Pauley’s work remains intact. The property was originally seventeen acres, but was subdivided in 1989. The property now consists of one acre.
The Winship House was listed on the National Register of Historic Places in 2005 for its architectural significance and its association with George Winship, Jr., a prominent Atlanta business and civic leader.