Elon Osby, a descendent of William Bagley, who is buried in the cemetery, will talk about the history of the cemetery to the group before they start. Tamara Bazzle, Buckhead Heritage Pat President and Chair of the Cemetery Committee, will be attending as well.

The cemetery was established next to the Mt. Olive African Methodist Episcopal Church. The church, which was located adjacent to Pharr Road, was formed by newly freed slaves and existed as early as 1870.

In 1921, developer John Owens laid out a formal subdivision called Macedonia Park for the African American residents who had gravitated to the area. Generally, the residents worked on nearby farms or performed domestic service for Buckhead’s affluent white citizens. Macedonia Park eventually became a thriving community with over 400 residents, three churches, two grocery stores, barber shops, and restaurants.

However, between 1945 and 1953, Fulton County acquired all of the homes in Macedonia Park through negotiation or eminent domain to make way for a public park, which was originally called Bagley Park, but is now named Frankie Allen Park.

Buckhead Heritage has steadfastly advocated for the preservation of Mt. Olive Cemetery. Due to the efforts of Wright Mitchell, founder of Buckhead Heritage, in 2010,  a developer was successfully prevented from removing graves from the site. The organization has also led two efforts for the rehabilitation and repair of headstones in the cemetery.

The next book club will review Prohibition in Atlanta: Temperance, Tiger Kings & White Lightning written by Ron Smith and Mary O. Boyle. The group will gather at the Mathieson Exchange Lofts in Buckhead. The authors will discuss Georgia’s protracted and intense battle that changed the industrial and social landscape of Atlanta and unleashed a flood of Illegal liquor that continually flowed in the wettest city in the South. Book club gatherings are free, please register here or call (404) 467-9447. 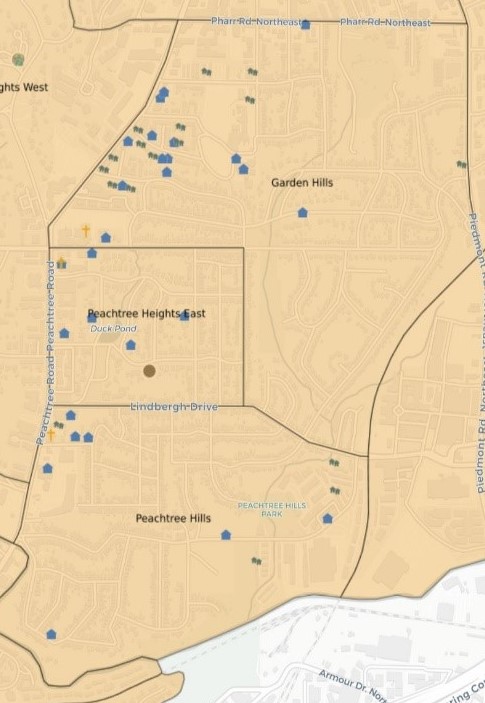 Buckhead Heritage will discuss their ongoing project to collect and archive Buckhead historic resources and their current entries for these three neighborhoods. We will talk about history of these areas, discuss what is and is not currently in our archives, and our plans for additions in 2019. Over 650 Historic Places throughout Buckhead, mapped by neighborhood and street, grouped into 24 themes like Architecture, Social, Military are currently on our website. Future updates will include expanded online features and additional survey entries. Persons interested in local history and learning more about Buckhead neighborhoods are invited to this free program at Garden Hills Elementary School, 285 Sheridan Drive, Atlanta, Ga 30305. There is limited disabled access. For further information about the gathering, please contact Executive Director Richard Waterhouse at (404) 467-9447 or rwaterhouse@buckheadheritage.com.

The next book club will review For the Kingdom and the Power: The Big Money Swindle That Spread Hate Across America written by Dale W. Laackman. The author will be traveling to Atlanta to discuss the careers of Bessie Tyler and her business partner, Edward Y. Clarke, who are the focus of the book.  It is the story how two brilliant and talented people could change the face of America purely in the name of greed.  They were amoral con artists of the first degree.  We can learn from their actions to assure it cannot happen again.  Bessie Tyler became very wealthy and built a Buckhead home now on the National Register, where Buckhead Heritage held their Holiday Party. This book club gathering is free to members, please register here or call (404) 467-9447. The author has graciously donated books for the first 15 members that register for this event.

Buckhead Heritage hosted its annual Holiday Party on Wednesday, December 13 at the beautiful and historic home of Daphne and Boyd Eaton on Howell Mill Road. Over 125 guests celebrated a great year and the holidays with fellow Buckhead preservationists. Buckhead Heritage raised over $20,000 from this fundraiser, and we thank all our wonderful supporters. 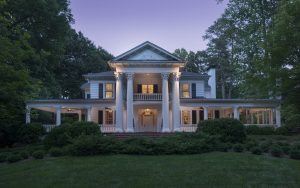 Honorary Co-Chairs were Melody and Joe Thomas, long-time supporters of Buckhead Heritage. Event Co-Chairs were Board Members Charlotte Margolin and Christy Morris. This was a rare opportunity to see this historic Buckhead home, Halycon Oaks.  Guests gathered to celebrate the holidays with an evening of music and dining, and heard Daphne Eaton talk about the fascinating history of this residence, which was placed on the National Register in 2006.