In June 2015, Buckhead Heritage completed the repair of headstones at Mt. Olive Cemetery that had been recently vandalized. In addition, markers that had been leaning precariously were stabilized. Brick and fieldstone grave enclosures were reset to make them clearly visible. Headstones at the site were also cleaned to remove moss and lichens. Buckhead Heritage sincerely thanks restoration specialists Ashley Shares, Chaunce Braun, and Michael Wettlaufer for their expert work and the donors who made all of this work possible. 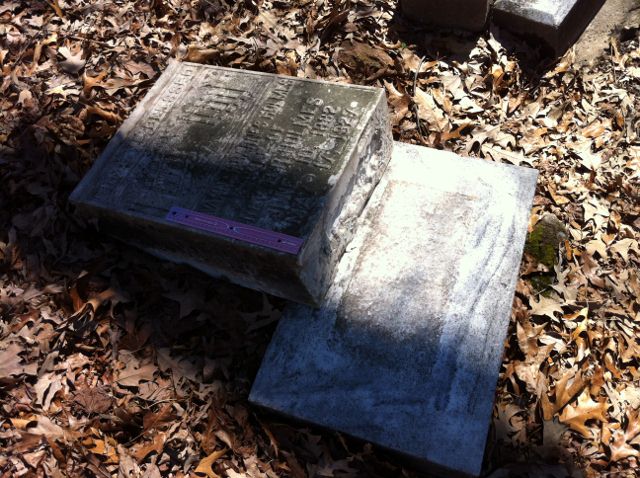 In May 2013, Buckhead Heritage contracted with restoration specialist Dustin Hornsby to repair the most significant headstone at Mt. Olive Cemetery, which belongs to Savannah Holmes. Buckhead Heritage sincerely thanks Harriet and Kip Kirkpatrick for making this repair possible.

Savannah was a graduate of Morris Brown University and subsequently became a teacher in 1916. By 1919, she was a teacher at the Holmes Institute on Fort Street in downtown Atlanta. Rev. B. R. Holmes was the president of this Institute for homeless children. Savannah and Rev. Holmes married in 1920. After her death in 1927, her obituary stated that she was “for many years an active member of Big Bethel church, a member of the alumni association of Morris Brown University. She was among the most cultured of our race.” It also stated that “she spent her life doing missionary work among the more unfortunate; she was a valuable assistant to her husband, Rev. B. R. Homes, in the management of the affairs of the Holmes Institute.” Her marble headstone has an open book on top, symbolic of her education. It also has gates opening up to a distant star, which represents heaven, a reward for her years of dedication to her church and community.

An Application was filed in March of 2009 with the City of Atlanta by Brandon Marshall and Community Renewal LLC to remove graves from historic Mt. Olive Cemetery at Frankie Allen Park. In December of 2009, the Atlanta Urban Design Commission (AUDC) voted to recommend to the Atlanta City Council that it deny the application.

In September 2009, as Brandon Marshall’s application was being reviewed by the City of Atlanta, a lawsuit was filed in Fulton County Superior Court against the developer on behalf of Elon Butts Osby, whose ancestors are buried in Mt. Olive Cemetery. Ms. Osby was represented by Buckhead Heritage Society President Wright Mitchell and his law firm, Constangy, Brooks & Smith, LLP on a Pro Bonobasis. The lawsuit argued that Mt. Olive is a public cemetery and therefore cannot be disturbed under Georgia law. Following a hearing on October 19, 2010, the Superior Court of Fulton County issued a Final Order which bars the developer from “disturbing the Mt. Olive Cemtery or otherwise appropriating it for private use.” Read the full court document here.

Please read the Conger Report to learn more about the history of Mt. Olive Cemetery.