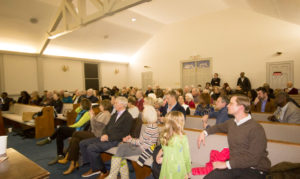 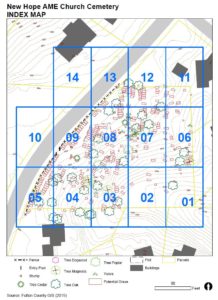 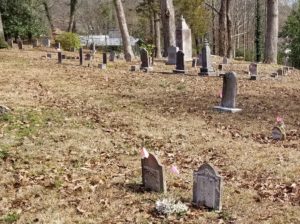 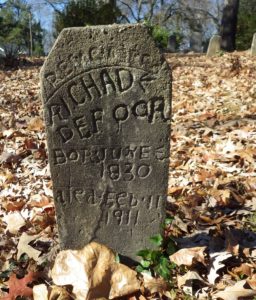 by Tamara Bazzle, Board Member and Cemetery Committee Chair

On March 4th over eighty people gathered on a rainy evening at New Hope AME Church on Arden Road to experience an important presentation by Matt Matternes, Ph.D. The first cases of COVID-19 had appeared in Fulton County just two days earlier, but on March 4, members of New Hope and Buckhead Heritage, as well as residents of the surrounding neighborhoods were focused on Dr. Matternes, Senior Mortuary Archaeologist and Physical Anthropologist with New South Associates in Stone Mountain.

Beginning in early December, 2019, Matt and his team studied New Hope Cemetery’s history, while inventorying and mapping its grave sites. It is widely known that New Hope AME Church sits on property bequeathed in 1872 by the Will of James H. “Whispering” Smith, who is buried nearby in Harmony Grove Cemetery, but that was not the case with the cemetery property, which was owned by Clark Howell until 1861.

Matt hopes that future research will illuminate the complete title history of that parcel. Public records disclosed that while the cemetery grounds were purchased by New Hope trustees in 1898, marked graves pre-date this purchase. There is evidence to suggest that burials were going on there as far back as the 1860’s, which might support the oral tradition that slaves are buried there. Further investigation is needed.

Matt identified over 330 burial sites, but experience tells him that the number could be significantly higher. 164 of the graves have formal markers; 54 have informal markers, and 115 are partially or unmarked potential gravesites. The names of 128 individuals were recorded. The last marked grave was that of Lizzie May White, who was interred in 2011 next to her husband, Arthur White, who had passed away almost 40 years earlier in 1973. Each grave was assigned an inventory number and, when available, the name, date of birth, date of death, marker style and material, and epitaph. Both head and foot markers were noted.

During his captivating presentation, Matt shared examples of the different styles of formal markers found in the cemetery:  tablet, flush, obelisk, beveled, block and statue. Informal markers, which are often seen in folk cemeteries like this one, are primarily fieldstone, but other forms include furniture fop markers, metal pole markers (because of their association with running water), and funeral home spikes. Matt also showed photographs of existing plants that are often associated with cemeteries. Fascinating to many of the attendees was Matt’s introduction of the concrete artist Eldrin Bailey, an African American professional gravedigger, whose markers date from the 1930’s through the 1960’s. Often his markers were offered by funeral homes as part of a package that included the coffin, a service and the marker. New Hope contains over 60 of his markers!