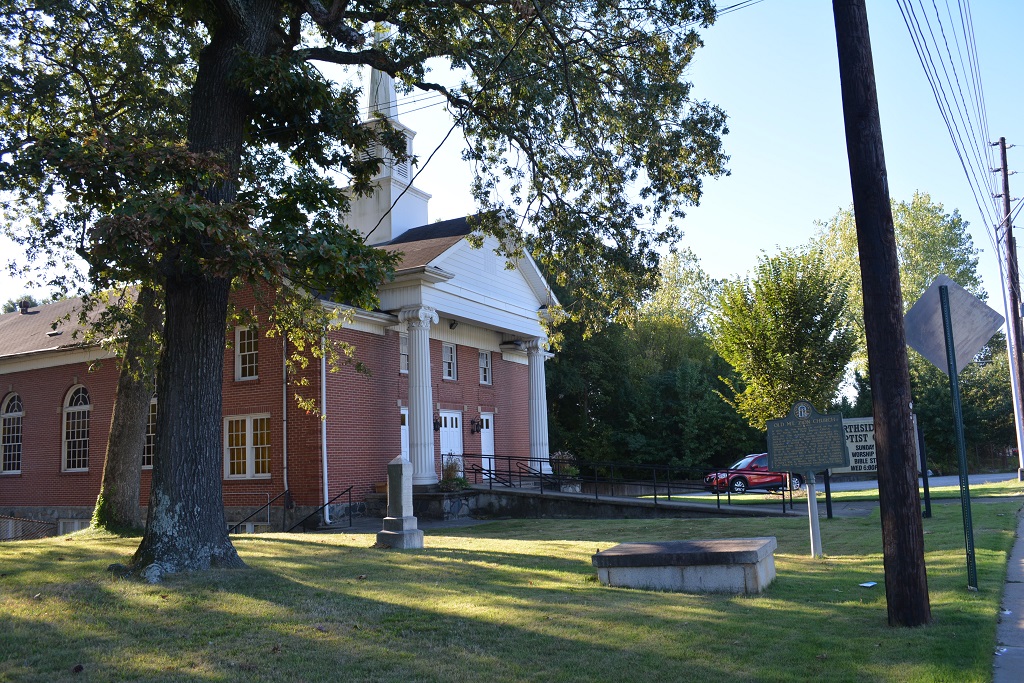 In 1864, the Old Mt. Zion Church stood at the location of the present Northside Park Baptist Church at 1881 Howell Mill Road. There are two monuments in front of the church, which are both visible from the street and not contained within a traditional cemetery boundary. A Georgia historical marker, installed in 1955 for the Old Mt. Zion Church, stands prominently adjacent to the sidewalk.

An archaeological investigation has not been performed at the site, so locations of unmarked graves at the cemetery are unknown. However, Franklin Garrett’s Atlanta Necrology Database for the cemetery indicates that as of his recording on November 4, 1930, there were at least 30 graves, most unmarked except for a few uninscribed field stones. Several members of the Johns family, including the patriarch John D. Johns and his wife, Nancy, are buried there. John and Nancy were “pioneers of the neighborhood” and both died within a week of each other during a smallpox epidemic in 1868 or 1869.

An above-ground, box-shaped, granite tomb for H[iram] H. Embry is located perpendicular to the sidewalk and underneath the historical marker. The slab is engraved simply: “H. H. Embry; Born Nov. 2nd, 1805; Died Nov. 18th, 1877.” Embry was an early settler of the area of DeKalb County that later became Fulton County in 1853; the historical marker denotes that Embry was a “pioneer resident of this vicinity.” His name appears on Civil War maps from 1864, close to Mt. Zion Church, with land holdings extending north to Peachtree Creek. His obituary, published in the Daily Constitution on November 24, 1877, described him as follows:

“Hiram H. Embry, whose death occurred last Saturday night, was one of the oldest residents of Fulton county. He was born in Oglethorpe county, near Athens, in 1805. He removed to DeKalb county, and has lived near Atlanta fifty seven years. He lived on the farm on which he died thirty seven years. He was an useful and respected citizen, and died in the faith of an earnest Christian. Fulton had few older and no better citizens. His death is greatly regretted by all who knew him, and he will be missed throughout the neighborhood surrounding his old home.”

He died intestate, and in October 1878, Embry’s land, approximately seventy acres (within Cook’s district and part of land lot No. 158 of the 17th district), was sold at auction.

Another interesting story surrounds the other monument, farther back from the sidewalk, an obelisk erected by siblings for Sergeant William R. Moore in memory of his death during the 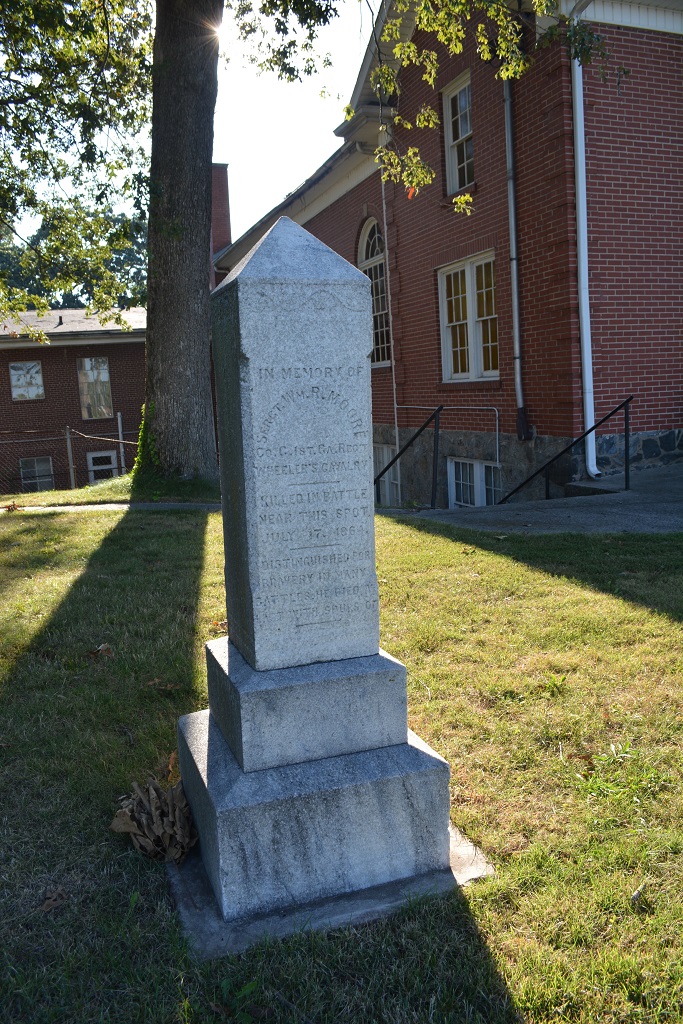 Battle of Peachtree Creek on July 17, 1864. Sgt. Moore was part of the 1st Georgia Regiment, Wheeler’s Cavalry, according to the historical marker. Further research uncovered an Atlanta Constitution article from August 21, 1900 entitled “Tribute to Dead Comrade,” part of which described the exercises to honor Sgt. Moore’s memory 36 years after his death:

“Sergeant William R. Moore, of company G, First Georgia cavalry, was one of the bravest men who fell at the battle of Peachtree creek. He was a brother of Captain Jake Moore, of the penitentiary department. When his dead body was found, it was hastily buried in an improvised coffin made of unplanned boards, hewn out with an ax. For years the grave remained unmarked on account of an inability to find its location. Recently, through the aid of some of his comrades and residents of the neighborhood, the grave was located, and a suitable monument erected. The last resting place of the dead hero is in Embry’s graveyard.”

The article mentioned that General Clement A. Evans, members of Wheeler’s cavalry, and other prominent veterans participated in the ceremony to install the monument, with all confederates invited. Sgt. Moore’s local relatives and members of his family in Rome were also present. The west side of Sgt. Moore’s obelisk states: “Distinguished for bravery in many battles, he died at last with spurs on.”