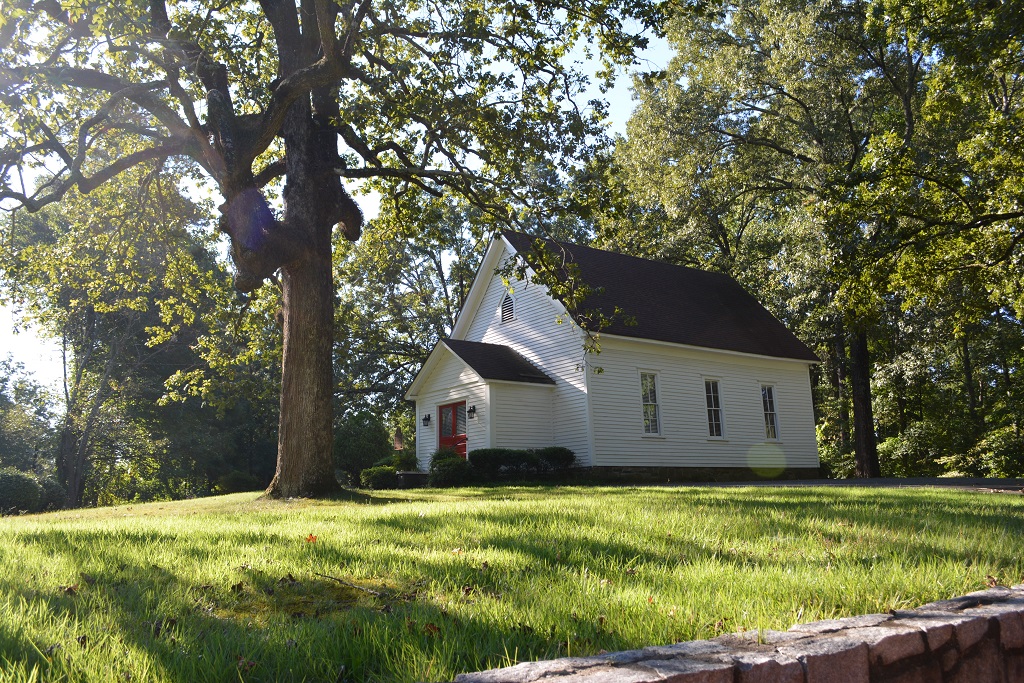 Pleasant Hill Cemetery stands adjacent to Paces Ferry United Methodist Church on Paces Ferry Road at Mt. Paran Road. The white clapboard church building – built in 1896 – may be one of the oldest in Buckhead. The cemetery, originally called Pleasant Hill Methodist, predates the church with land being donated for the purpose in 1877. When Atlanta historian Franklin Garrett completed a survey of the cemetery in early 1931, he documented 15 graves with the earliest burial in 1896. Find A Grave documents 92 interments, some as recent as 2013, but notes that many burial locations are unmarked.

The man who donated the cemetery land, “Old Man” William “Billy” Brown, was described by the Atlanta Constitution shortly after his death in August 1897 as “one of the best known men in the county. He was an old Confederate soldier, having fought with Stonewall Jackson, receiving several wounds.” In her book, Buckhead: A Place for All Time, Susan Kessler Barnard notes that William Brown “built his home on Paces Ferry Road, which was later the location of Franklin M. Garrett’s home.”

Unfortunately, William Brown was attacked by a man wielding a pick ax after a disagreement while working on the roads near Bolton. Newspaper articles were hopeful he might recover from the head injury, but it seems he never regained consciousness and died less than a week after the attack. Brown was buried at Pleasant Hill on August 31, 1897, “just a half mile from where the death blow was struck.” His obituary states he left a wife and six children. Brown’s attacker, Lon (or Leon) English, was charged with murder and the trials extended for several years. Eventually, in 1899 at the third trial, he pleaded guilty to involuntary manslaughter and was sentenced to jail.

An historical marker was placed in front of the church by the Thomas Johnson Chapter of the National Society of Colonial Dames XVII Century in 2010. It reads:

“On 29 September 1877 William Brown donated one acre of land at the intersection of Paces Ferry and Mount Paran Roads for the purpose of establishing and building a church. Pleasant Hill Methodist Church was first served by circuit rider minsters, one of whom was Reverend W[illiam]. J[oseph]. Rolader. During the week the church housed the Pleasant Hill Private Academy. Miss Ida Williams, the first teacher, established a Carnegie Branch library in the Buckhead community. A local library was named in her honor.

The adjacent Pleasant Hill Cemetery contains the marked grave of William Brown who served the Confederacy. Many soldiers were killed nearby during the 16-17 July 1864 engagement between Confederate General Joseph Wheeler’s cavalry and Union General George H. Thomas’s 20th Corp.