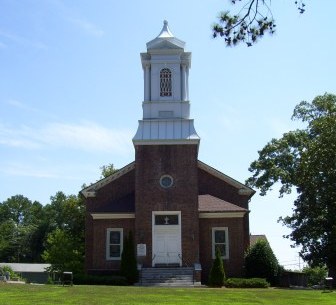 Standing on a noticeable rise along Powers Ferry Road, Sardis Methodist Church features a central entrance tower and symmetrical façade. The church’s simple edifice was constructed of striated bricks in a monk bond pattern, which creates a rusticated effect. The church’s original steeple was destroyed by a storm in 1965. The current steeple with its modest spire and Colonial Revival-style details was a later addition, but reflects the original steeple’s design intent.

In 1925, the Sardis Methodist Church (which became Sardis United Methodist Church in 1968) employed local architect Owen James Southwell to design a new church building for the congregation. The church’s congregation had continuously occupied the site on Powers Ferry Road since at least 1848. However, the current building, which was completed in 1927, is at least the third church on the site.
Owen James Southwell had studied architecture at Tulane University and later attended the Carnegie Institute of Technology in Pittsburg where he studied under renowned architect Henry Hornbostel. Hornbostel later employed Southwell and asked Southwell to manage his Atlanta office. In 1922, however, Southwell entered into private practice; he was one of the few trained architects practicing in Atlanta at the time. His known designs include residences in Druid Hills and Buckhead and an apartment building in Virginia-Highlands. Sardis is the only known example of his ecclesiastical architecture in Georgia.
The Buckhead Heritage Society prepared the National Register nomination materials for Sardis Methodist Church and Cemetery in 2010. The property was officially listed on the National Register of Historic Places in 2012.
Sources:
Historic Property Registration Form for Sardis Methodist Church and Cemetery.
Photo credit: Hilary Morrish