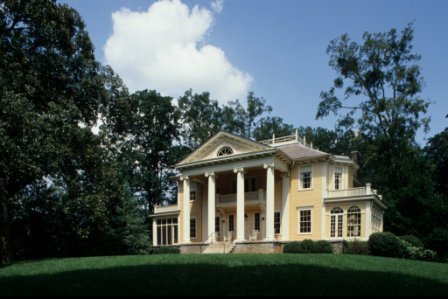 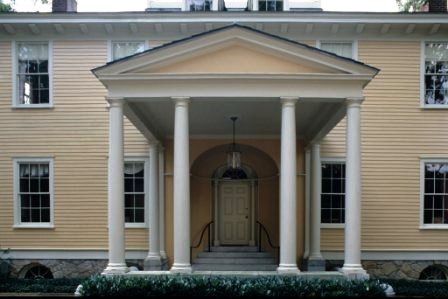 Spotswood Hall is a two-story, Classical-Revival style residence that stands atop a knoll overlooking Argonne Drive. Originally designed by Atlanta architect A. Ten Eyck Brown, the house features a pedimented portico with four massive iconic columns on the primary façade. The main doorway is flanked by sidelights and topped by a delicate fanlight. Meanwhile, a cantilevered balcony extends from a central doorway on the second floor.

In 1933, the home was remodeled by famous Atlanta architect Philip T. Shutze. He added a new rear entrance to the home, which featured a one-story pedimented porte-cochere, but left most of the original exterior intact. He did, however, redesign much of the interior including the addition of a new entrance rotunda. In the same year, renowned artist Athos Menaboni painted an Oriental-inspired mural on the rotunda’s walls.
Spotswood Hall was one of the earliest country estates in what is now known as Buckhead; it was built by Shelby Smith, Sr., a member of the Fulton County Commission, in 1913. In 1918, the property was purchased by Lucian Lamar Knight, a noted historian and the first director of the Georgia Department of Archives and History. It was Knight who named the residence Spotswood Hall in honor of one of his ancestral homes. The stock market crash of 1929, however, forced Knight to sell the home. It was purchased by Atlanta businessman Walter Clay Hill, Sr., who later commissioned Philip Shutze to remodel the home’s interior.
In 2000, Spotswood Hall was designated a Landmark Building by the City of Atlanta. In 2002, it was listed on the National Register of Historic Places for its architectural significance and its Menaboni artwork. The façade of the residence is protected in perpetuity by a preservation easement.
Additional information:
For more information on the history and significance of the property, visit www.atlantaga.gov.
For more information regarding preservation façade easements, visit www.easementsatlanta.org.
Source:
National Register of Historic Places Registration Form for Spotswood Hall.
Photo credit: Historic Preservation Division, Georgia DNR. For permission to use the above photographs, please contact the Historic Preservation Division.