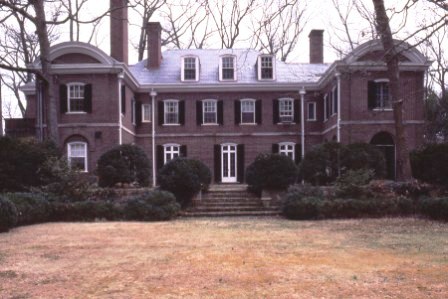 The Witham-Clark House is a Colonial Revival style, U-shaped residence that rests atop a knoll overlooking Andrews Drive. The main portion of this red brick residence is two and one-half stories, while two-story, recessed wings are positioned on either side of the central block. The home’s main entranceway is flanked by fluted pilasters and capped by a simple yet heavy frieze, and a broken, scrolled pediment. A stone stringcourse visually indicates where the first floor transitions to the second, while stone quoins highlight the corners of the massive central portion of the home. In the rear, the house encircles a courtyard on three sides, while a stone walled garden stretches away from the main residence to a brick guest house and garage.