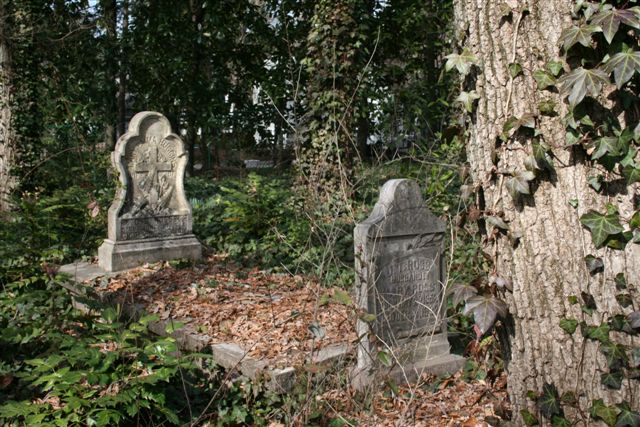 During the week of April 9th, 2006 the first phase of the Harmony Grove Cemetery restoration project began.  The first phase consisted of a complete eradication of any ground cover that was determined unworthy of preservation.  This consisted primarily of vast amounts of ivy and other fast growing nuisance vegetation.  Landscape Architect Edward Daugherty (FASLA) surveyed the property prior to the commencement of work and identified all of the plantings to be retained with green surveyor’s tape.

The landscaping firm of Jay Hort Services and a work crew donated by Greenwood Cemetery spent many hours removing ivy, weeds, leaves, dead limbs and debris from the premises.  Additionally, Downey’s Trees, Inc. removed several dead and dying trees from the property at no cost.

After the ground cover was removed from the property, it became clear that there were many informally marked or unmarked graves on the premises.  As such, Buckhead Heritage enlisted the Mortuary Archaeology Division of New South Associates to perform a mapping of the cemetery, which comprised the Second Phase of the restoration.  The Second Phase began in October of 2007.

The scope of work performed by New South Associates was as follows: First, a Mortuary Archaeologist and Assistant examined the Cemetery and identified burial locations based on surface features.  In particular, linear human-sized depressions, low mounds, and formal and informal mortuary architecture were examined to identify the location and size of burial features.  Each grave was assigned a feature tracking number and all graves were marked with pin flags containing the feature number.  All identified graves were then plotted on a sketch map of the investigation area.  An inventory of basic information about each grave, including its dimensions, condition, presence and type of architecture, surface treatments and personal identification (if present) was recorded for each feature.

Additionally, the areas between marked graves were tested for additional graves by inserting a steel-tipped probe every two feet along transects spaced two feet apart.  Positive probes, those filled with comparatively soft deposits, were followed-up with additional probes to determine the approximate size and orientation of the subsurface feature.  Once established, all newly identified graves were marked with pink pin-flags, inventoried and plotted on the cemetery sketch map.  Following their investigation, New South Associates generated a Report, Grave Identification Chart and Map.

Also, while conducting their work the archaeologists found many artifacts including pottery, broken bottles and metal dishes in the southern portion of the Cemetery.  At the turn of the century, it was common for African-Americans to throw broken crockery, glassware, kitchen utensils and other kitchen articles on the graves of the deceased.  Accordingly, the archaeologists concluded that it is possible that African Americans – – possibly slaves – – are buried at Harmony Grove.

Upon completion of their work, the archaeologists officially registered Harmony Grove Cemetery with the State of Georgia as archaeological site 9FU357. 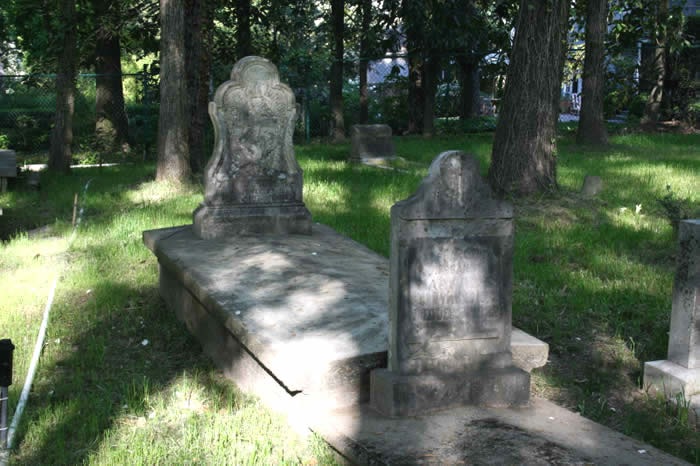 The Third Phase of the restoration consisted of implementing the Master Landscaping Plan developed by Robert and Company.  Jim Cothran (Director of Planning and Landscape Architecture) and Andrew Kohr (Assistant Director of Historic Preservation and Cultural Landscapes) led the development efforts on behalf of Robert and Company.

The Landscaping plan called for the installation of a Tennessee Crab Orchard Stone Path, planting of grass, installation of bushes and trees including Burford Hollys, Cherry Laurels and Hemlocks.  Much of the Master Landscaping Plan was implemented during a Hands On Atlanta Day project in the Fall of 2008.

Buckhead Heritage continues to maintain Harmony Grove Cemetery.  We would like to thank Habersham Gardens for their services including lawn maintenance, weed control, pruning, and fertilizing.  Buckhead Heritage is also extremely appreciative of the services Chris Hastings of Arbormedics has donated to help maintain and protect the trees at the cemetery.