The North Fulton Park Cemetery was the burying ground for the Fulton County Almshouses and paupers of the county from 1911 until the mid 1930s. The remaining unmarked graves of this cemetery are now located near the fifth green of the North Fulton Golf Course at Chastain Park. The Fulton County Almshouses occupied two buildings on West Wieuca Road from 1911 to the 1960s and were segregated by race. The former white almshouse is now the Gresham Building at The Galloway School, which has been in operation as a private school since 1969. The building was listed on the National Register of Historic Places in 2014; see more information on the building here. The former African American almshouse is now the Chastain Arts Center.

An article written in 1912, shortly after the new almshouses opened on West Wieuca Road, described several residents at the ‘poor house,’ saying that “the class of people who are sent there are those in absolute poverty, who have nobody to take care of or look after them, and who have become so destitute and helpless… To such the almshouse is often the only waiting place, except the grave.” One such long-time resident was a man named “Colonel” Jim Hill, who lived at the almshouses for thirty-two years before dying in June 1912 at the age of 85. He was buried at West View (the funeral company provided a burial plot), after another article described him as “too good a man to fill a pauper’s grave.”

Indigents who died in the Poor House were often buried in the tract of land which became North Fulton (later, Chastain) Park. These people, homeless, rootless, had no other burial ground. A dirt road led south to the almshouse cemetery beside Lake Forrest Drive…. Few, if any, relics can be found at what would, without the golf course, be a melancholy location. The remains of the deceased inmates who were buried there have long since gone to dust. 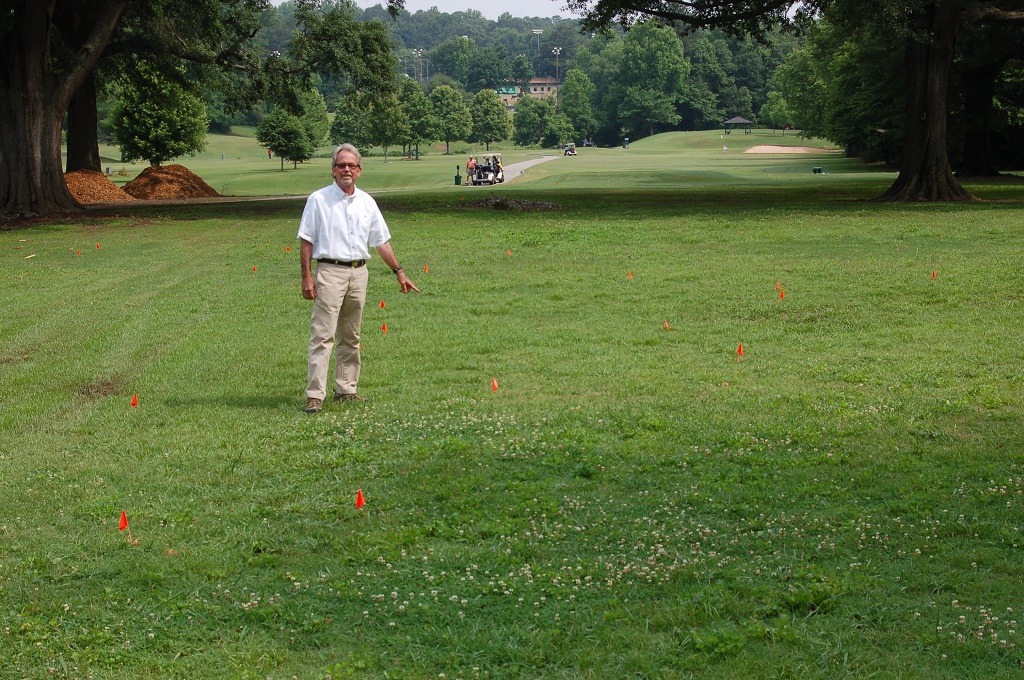 In 2014, The Chastain Park Conservancy commissioned a ground-penetrating radar (GPR) survey to confirm the location of the graves along Lake Forrest Drive. Eighty-six unmarked gravesites were identified. The GPR survey team also noted: “The bodies were generally six feet deep, facing the east for the Second Coming—the custom in the Bible Belt—and the golf course was carefully built around it, not over it.” The golf course was built in the 1930s as part of the development of North Fulton Park and opened to great fanfare in July 1940.

A 1949 Atlanta Constitution article about the county pauper’s cemetery indicates that bodies were removed from the cemetery site prior to the construction of the golf course. According to the article, Fulton County Land Agent C. F. Boynton moved 311 paupers’ bodies in 1934 from the site near Nancy’s Creek on Lake Forrest Drive to the Paupers’ Cemetery of Fulton County, located on the county’s Negro Industrial Farm. No further information on this action has been found, but it is likely that the remaining graves at the North Fulton Park Cemetery pre-date this removal in 1934.

Obituary and death certificate research has only confirmed the identity of one original burial in the cemetery–a seventy-year-old white man named L.H. Evans who died in 1922. Future plans to memorialize the cemetery involve planting wildflowers at the site and installing interpretive signage.

Photo appears courtesy of an article published at BuckheadView.com on May 27, 2014.

Hurtel, Gordon Noel. “‘Over the Hill to the Poor House,’ Where Human Derelicts Find a Refuge,” Atlanta Constitution, Feb. 18, 1912.