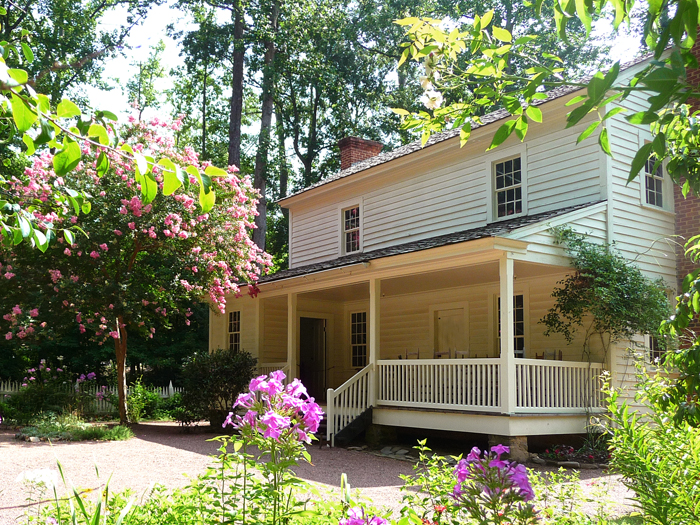 The Tullie Smith House, located on the grounds of the Atlanta History Center, is a significant example of a house type known as the plantation plain, which was prevalent in Georgia during the late 18th century until about the time of the Civil War. The house is a two-story, side-gabled building with chimneys on each end. At the rear is a one-story range of rooms capped by a shed roof.

This house type, a typically rural phenomenon, was well-suited to the Southern climate. The door and window placement facilitates air circulation with window openings on the front façade corresponding with those on the rear elevation. In addition, windows on either side of the end chimneys provide cross ventilation. The Tullie Smith house stands on a raised foundation which further aids air flow.
One end of the front porch of the Tullie Smith House is enclosed to create an additional room, which was sometimes seen in this house type. This type of room was often referred to as the parson’s or traveler’s room. The only access is from the door to the front porch, which allowed the family to retain its privacy.
The Tullie Smith House was built by Robert H. Smith who settled in DeKalb County in 1833, on what later became Druid Hills Road. Tullie, Robert Smith’s great-granddaughter, was the last person to occupy the house; it is known by her moniker today. By the 1960s, the farm house was surrounded by highways and modern development. It was donated and moved to the campus of the Atlanta Historical Society in 1969 in order to preserve it. The Tullie Smith House was listed on the National Register of Historic Places in 1970.
Additional Information:
For more information on the Tullie Smith House, visit www.atlantahistorycenter.com.
Sources:
Cook, Jody. “A Realistic Interpretation of the Plantation Plain Style.” Master’s thesis, University of Georgia, 1976.
National Register of Historic Places Inventory-Nomination Form for Tullie Smith House.
Photo credit: Atlanta History Center. For permission to use the above photographs, please contact the Atlanta History Center.