Buckhead Heritage led about 70 people for a Peachtree Heights East Walking History Tour on March 14th 2020, our last physical event before Coronavirus shutdowns. See the end of this article for more information about repeat scheduling.

The tour began at the historical marker located at the corner of Potomac Street and Lakeview Avenue by the Duck Pond. Organized and led by Buckhead Heritage Executive Director Richard Waterhouse and Caleb Brown, who were joined by historical Buckhead character Eretus Rivers, aka Ed Daniels.

The tour included many fascinating stories about the oldest planned neighborhood in Buckhead. On June 19, 1909, initial lots were auctioned for the first planned neighborhood in what is now known as Peachtree Heights East. Designed by the New York firm of Carrere and Hastings, the neighborhood was nestled between Peachtree Street on the west, Brookwood Drive on the east, and between Mayson Avenue (now Lindbergh Drive) after aviator Charles Lindbergh on the south and East Wesley on the north. In 1920, the eastern boundary was extended to Acorn Avenue.

Over 2,000 people attended the auction and Eretus Rivers and Frank C. Owens sold 82 lots for a total of $171,000. Special cars were run to the park for the purpose of accommodating those who wished to bid and watch others bid. In order that no one might have to return to the city for lunch, Eretus had generously provided it.

With approximately 330 homes within this unique neighborhood, Peachtree Heights East house styles range from early 20th century American two story four-square, Craftsman Bungalow, Cape Cod, Tudor Revival, Mission Revival, and Ranch to 21st century home styles. We will see examples of several of those. Several early homes were built from Sears and Roebuck “kits” (we will point one out on the tour) and many original homebuilders were family members who built two homes with a shared driveway.

At 2525 Potomac Street, which is no longer there, Flannery O’Connor lived for over year. Her father, Ed O’Connor lived in the house from 1938 to 1940, when he took a job at the Federal Housing Authority. Flannery attended North Fulton High School, her first public school experience. Her aunts and uncles were very involved early on with Christ the King Catholic Church in 1936. However, she and her mother did not like city life so they moved back to Milledgeville in 1939. Flannery’s father, meanwhile, was diagnosed with lupus and died in 1941.

The home of Hamilton Douglas, Jr. and later the home of Bill Bell who wrote the History of Peachtree Heights East that we are using for our research of this tour was located at 120 Lakeview Avenue, built in 1924. Mr. Douglas, Jr. wrote the bylaws for the organization that has evolved into the Peachtree Heights East Neighborhood Association. His distinguished career included being selected as one of the “five attorneys of unquestioned ability and integrity” to investigate corruption in the administration of Governor Marvin Griffin.

His sister, Ellen Douglas Mankin, live next door. She was the first woman from this state ever elected to the House of Representatives. Mankin defeated 17 other candidates, all male. Although she won the popular vote for re-election in 1948, she lost the election based on county unit votes. This result helped convince the leaders of Atlanta to launch an all-out attack on the county unit system. The resulting 15-year legal battle, in which her brother, Hamilton Douglas, Jr., coordinated, led to the eventual overthrow of the system.
The original home of Harriet P. Laing (1845-1925), house no longer there, was located at 179 Lakeview Avenue. Original house was completed by 1910 and was a Mediterranean revival style art bungalow with a mission style tower. She bought lot 25 in Block 4 of Peachtree Heights East for $880, she took out a mortgage with the developer Frank C. Owens. The terms were $220 down with the remainder payable in installments of $110 every six months at an interest rate of six per cent.
She lived here for six years. She was no stranger to Atlanta. She owned a boarding house at 86 South Pryor Street in 1896 and two years later she operated another boarding house at 15 Houston Street, now John Wesley Dobbs Avenue. By 1898 she had become manager of the Saint Bonaventure Hotel, where she remained until 1901.

The home of Joseph and Nell Winship was located at 2626 Brookwood Drive. It is a two-story Tudor Revival-style residence built in 1925 and designed by Atlanta architectural firm of Burge and Steven, which had been founded in 1919 by recent graduates of Georgia Tech – Flippen Burge and Preston Stevens. The Winship House was one of the earliest commissions. The property’s grounds were originally designed by William C. Pauley, one of Atlanta’s first trained landscape architects. Little of his work remains intact. Property was originally 18 acres but now only one acre.
171 Peachtree Way was the Home of Emily Irby Winship (1884-1968) and George Winship, Jr. (1884-1956). George Winship, Jr. was a prominent Atlanta business man. He was active in civic and educational affairs. He was Vice President of the Fulton Supply Company and Director of The Atlanta Gas Light Company and Director of the Fulton National Bank of Atlanta. For over seven decades the Winship Homes graced the large two-acre lots surrounded by Brookwood Drive, Winslow Way, and Peachtree Way. In 1989 and 1990, the lots were divided and new homes now surround those of the Winships. The original Winship structures escaped destruction through the efforts of the neighborhood association and the developers in reaching a compromise for the land use.

In 1957, Susan Hayward married Eaton Chalkley. He was a Georgia rancher and businessman who had worked as a federal agent. Although he was an unusual husband for a Hollywood movie star, the marriage was a happy one. She lived with him on a farm near Carrollton, Georgia and also had this house at 152 Peachtree Way. Her son attended Christ the King Catholic School. A long-time resident of Peachtree Heights East remembers seeing her arrive and leave in a very large black Cadillac with tinted windows so nobody could see the movie star. Chalkley died on January 9, 1966. Hayward went into mourning and did little acting for several years. She took up residence in Florida, because she preferred not to live in her Georgia homes without her husband. She died in 1975 and is buried in Carrolton.
While the Duck Pond did not exist when Mr. Rivers initially sold lots, the minutes of the Peachtree Heights Community Club in 1922 gives credit to two residents for building the “lake” and beautifying the area. They were “Henry G. and Nettie Jacobs lived at what was then 1 Potomac Avenue and Nat and Charlotte Sage lived at what is now 115 Lakewood Avenue.”

While Una Rivers provided the neighborhood with a treasured asset, her gift did not include an endowment to maintain the duck pond park. The Peachtree Heights East Neighborhood Association (originally the Peachtree Heights Civic Club) has supported and maintained the park for over 110 years through annual dues, fundraising and volunteer work days. Also, the Ladies of Lake Garden Club are very active with the duck pond and do fundraising as well.

At 2612 Parkside Drive, this house was designed by the famous architect Neel Reid (October 23, 1885 – February 14, 1926). It was built in 1912 for the S.C. Porter family. Mrs Porter was part of the firm Porter & Porter, interior decorators. Reid was born in Jacksonville, Alabama, in 1885. He moved to Macon, Georgia with his family in 1890. After an apprenticeship with architect Curran Ellis, Reid moved to Atlanta to continue his career at the suggestion of his mentor. Reid specialized in fine residential structures but also designed the 1908 Southern Railway passenger station (now Amtrak) and the Scottish Rite Children’s Hospital in Oakhurst.
The great thing about research is that you are always discovering new things and bringing folks back to life again. It reminds us that in the Mexican culture, they believe that each of us die three deaths: when our bodies stop functioning, when our mortal remains are laid to rest, and final death occurs the last time someone speaks our name. By sharing stories about the distinguished residents of Peachtree Heights East we continue their lives. 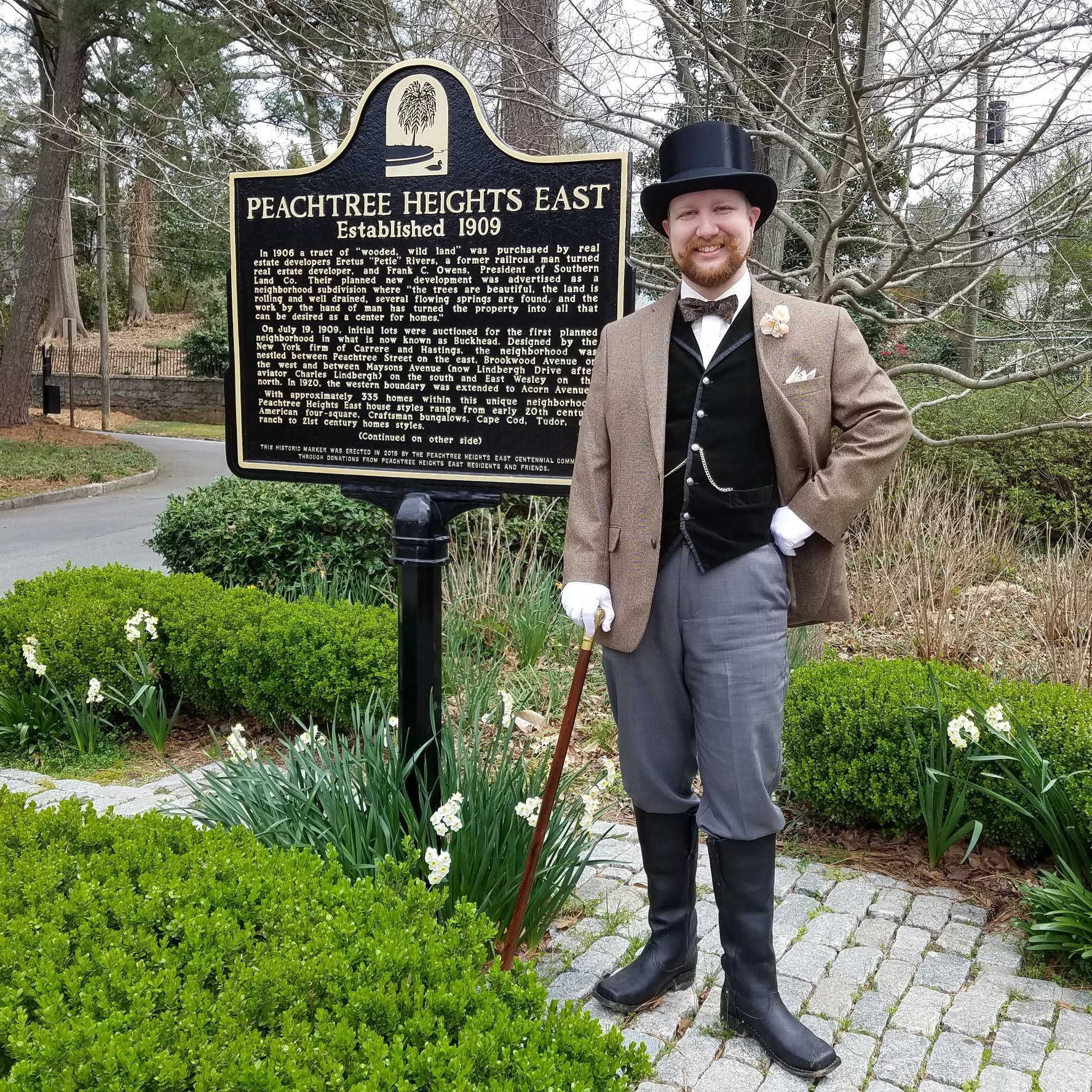