An Illiad of Woes

What: “An Iliad of Woes: Peachtree Creek and the Battles for Atlanta,” a lecture by Russell S. Bonds 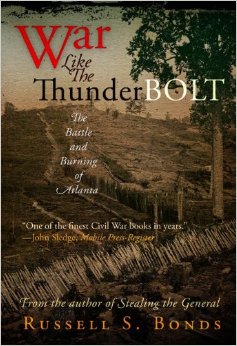 Summary: If the Battle of Gettysburg was the South’s High Water Mark, then the battles for Atlanta were perhaps its last chance. In the summer of 1864, across the last ten miles of an epic hundred-mile campaign, the Confederate Army of Tennessee fought four major battles in an effort to hold the heart of the Confederacy against Union forces under the hard-driving General William Tecumseh Sherman. Using words, maps and contemporary photographs, Russell S. Bonds, the award-winning author of Stealing the General and War Like the Thunderbolt, will take you through the desperate fighting at the gates of the Gate City, describing in vivid detail its characters, its cost and its consequences.

Biography: Atlanta native Russell Bonds is Associate General Counsel at The Coca-Cola Company and the award-winning author of War Like the Thunderbolt: The Battle and Burning of Atlanta and Stealing the General: The Great Locomotive Chase and the First Medal of Honor, now in development as a major motion picture. Russ is an honor graduate of Georgia Tech and the University of Georgia School of Law, and he lives in Marietta with his wife and three daughters.