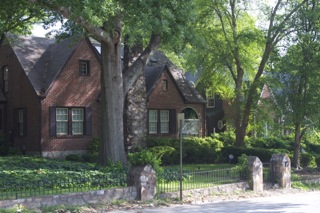 Garden Hills Historic District is an early 20th century residential neighborhood planned and developed between 1923-1941. It is roughly bounded by Delmont, Brentwood, and N. Hills Drives, and Piedmont, E. Wesley, and Peachtree Roads. The neighborhood is characterized by curvilinear streets, wide, divided roadways, and small parks designed to utilize the beauty of the natural landscape. Most of the earliest houses are Tudor style; other styles found throughout the district include Colonial Revival, French Eclectic, and Spanish Mission. Multi-family residential dwellings were a part of the original plan, and apartment buildings flank the core of the neighborhood, providing a transition from the commercial corridors along Peachtree and Piedmont to the single-family houses along the winding neighborhood streets. The district also includes two schools, a church, a clubhouse (rebuilt after the original clubhouse burned in 1999), and a historic commercial strip. Garden Hills is thus significant in its attempt to create a “family community” that included not only high-quality homes, but also many other components necessary for daily life. 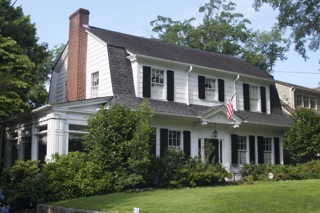 Garden Hills’ roots go back to the 1923 Beverly Hills development, which was later incorporated into Atlanta lawyer P.C. McDuffie’s Garden Hills Company. As private automobile ownership increased after World War I, people were able to live further away from where they worked and presumably reap health benefits in so doing. McDuffie initially advertised the planned neighborhood as the “Garden Spot” of Atlanta, and touted the benefits for children by the inclusion of a playground. The historic district is comprised of three sections, all of which were part of the original Garden Hills Company plan: the Peachtree Road section, opened in 1925; and the Country Club Section and the Brentwood Section, both planned by 1926 and fully developed by 1941. In the 1930s, neighborhood residents successfully petitioned local government to include both an elementary school and a high school within Garden Hills. North Fulton High School (today Atlanta International School), designed by the well-known Atlanta architecture firm Hentz, Adler, and Shutze, opened in 1932, ensuring that students could go to school near their homes instead of traveling to downtown Atlanta. Garden Hills Elementary, designed by Tucker and Howell, opened in 1938. In 1937, the George H. Bond-designed Second Ponce de Leon Baptist Church opened within the boundaries of the original neighborhood plan. The schools and church continue to be important institutional landmarks within the neighborhood.

Garden Hills retains a high degree of integrity as an early planned subdivision incorporating virtually all of the needs of its residents, whether apartment dwellers or single-family homeowners. There are relatively few intrusive structures found within the district, and it remains indicative of the lifestyle of the upper-income Atlantans for whom it was designed. Garden Hills Historic District was listed in the National Register of Historic Places in 1987.