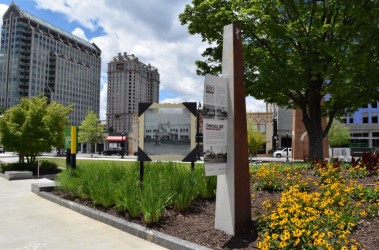 The local firm Daniell and Beutell designed the theater in the Spanish Revival style, echoing the exotic architecture often seen in larger movie palaces of the period. Its façade also featured a neon electric sign in the shape of a buck’s head—an homage to the legend that gave Buckhead its name.

The area around the theatre was Buckhead’s social and cultural center from the community’s founding into the 1950s. It experienced a lively heyday in the decades leading up to mid-century. In the 1920s, a Wender & Roberts Drugstore began drawing Buckhead’s teenagers and literary crowd around its soda fountain. In the 1930s, an open-air band shell hosted concerts. And in the 1940s, Margaret Bryan began teaching a generation of Buckhead’s children to dance on the second floor of the McDuffie building. Others preferred the pool hall downstairs.

After Buckhead’s historic core ceased to be the community’s central gathering place, Atlanta’s most famous “anonymous donor”—Robert W. Woodruff—contributed a million dollars for the creation of a park here. Commercial buildings were demolished and a new greenspace was dedicated in 1975. Charlie Loudermilk Park was rededicated in 2015 after a major renovation.