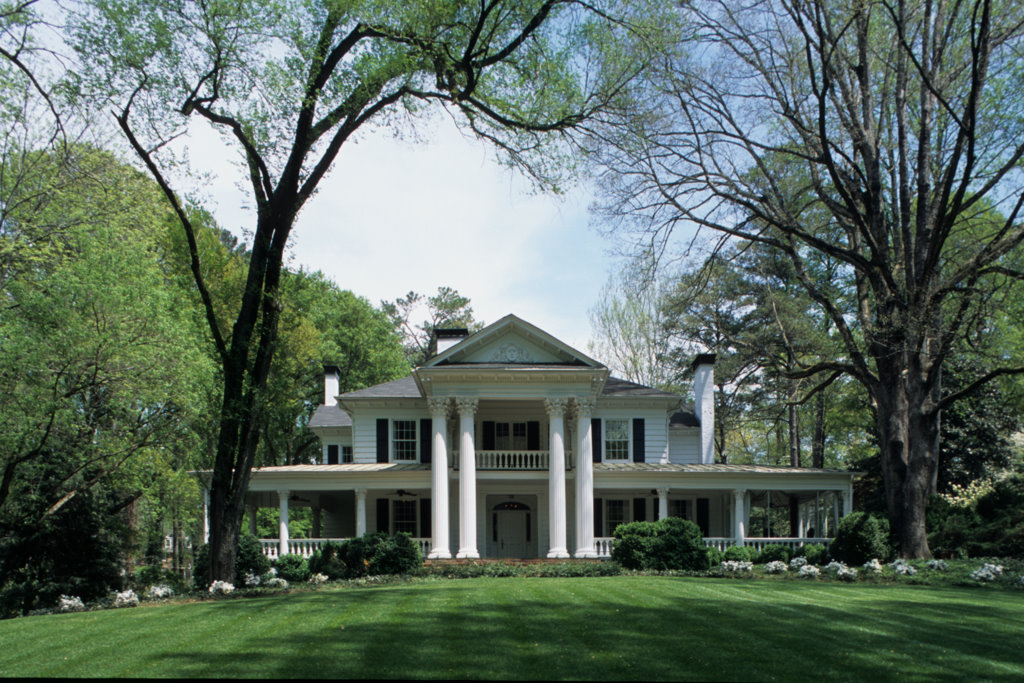 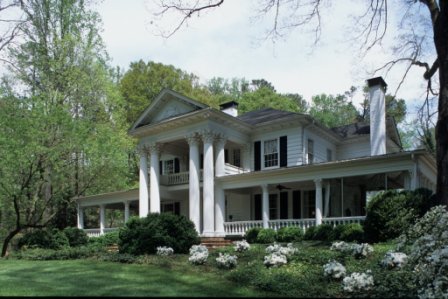 The Mary Elizabeth Tyler house on Howell Mill Road near Moores Mill Road and I-75 was built in 1921.Mary Tyler resided in the house until 1924. This Classical Revival-style residence was placed on the National Register in 2006 for its significant social history, women’s history, and architecture.

The original builder and owner of the house, Mary Elizabeth “Bessie” Tyler, formed the public relations firm Southern Publicity Association in Atlanta with partner Edward Young Clarke. The firm did work for the American Red Cross, the Salvation Army, and the Anti-Saloon League. But from 1919 until Tyler’s move to Los Angles and death in 1924 the firm took on public relations for the KKK. Clarke and Tyler were very successful in this work, helping to promote the Klan and substantially grow its membership after WWI. Along with her other work for the Klan Tyler founded and ran TheSearchlight, the official newspaper of the Klan, and lobbied for women to join the movement after they were given suffrage in 1920.

Tyler had been married at age 14 and deserted by 15. In her middle 30s, she was a widow with a grown daughter. She was very successful as a businesswoman from her public relations work, investments in several businesses, and real estate, including Klan related ventures.  She and her partner Clarke amassed fortunes as Klan membership swelled in the early 1920’s; her estate at her death was estimated to be well over $500,000.

The Tyler House is significant in the area of architecture because it is a good example of a Classical Revival-style house. Built in the first decades of the 20th century, these houses are defined by prominent one- and two-story porches, symmetrical fenestration, and classical details that adorn traditional Georgian house types. The house originally sat on 14 acres and features a two-story pedimented portico supported by massive Corinthian columns. A one-story porch stretches the length of the primary façade and wraps around both sides of the home. A balcony extends from the second story above the central entrance, which is bordered by sidelights and capped by a fanlight. Rear additions were made to the residence in 1977 and 2000.

The house was sold on the courthouse steps in 1925 after Tyler’s death, and has been home to numerous families since that have no connection with the Klan. Interestingly, the house was purchased in 1948 by Atlanta physician Dr. Maxwell Berry, founder of West Paces Ferry Hospital and Annandale Village, a non-profit residential center for the disabled.  Dr. Berry was a founding Elder of nearby Trinity Presbyterian Church on Howell Mill Road, and the house was used for early organizational meetings. The Trinity congregation embraced inclusive racial policies as a tenet of faith, and operated Trinity School, an ongoing private school and the first in metropolitan Atlanta to desegregate.

Buckhead Heritage Society, as well as the National Trust for Historic Places, in no way condones the actions by the KKK or this shameful era in our country’s history. At Buckhead Heritage we believe it’s important to understand and learn from our history, both our successes and failures, and use its lessons to help inform our future in a positive way.