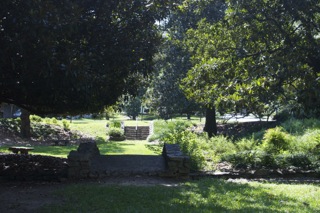 The Peachtree Heights Park Historic District (today known as Peachtree Heights West) is bounded by Peachtree Road on the east, Peachtree Creek on the south, and by the lines of Land Lots 111, 112, and 113 on the west and north. This district of approximately 400 houses was developed on land purchased from the Wesley Gray Collier estate in 1910. Developers Eretus Rivers and Walter P. Andrews touted the new neighborhood as “the best of city and suburban life.” Indeed, a naturalistic approach to landscaping was employed throughout the district, with large stands of trees undisturbed, and broad, sweeping front lawns with informal massing of native shrubs. The New York City-based firm Carrere and Hastings planned the neighborhood’s street layout, a curvilinear design that complements the natural terrain of the area. Peachtree Battle Avenue, the main thoroughfare, was designed with an expansive landscaped park in the median, and throughout the neighborhood, the natural streambeds have been preserved as parks. 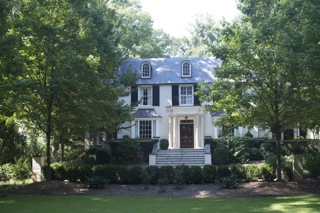 The houses in the Peachtree Heights Park Historic District are grand in scale, appearing as imposing structures rising from a natural landscape. Building lots are generously sized, with houses set far back from the street. A variety of house styles are represented, including English Tudor, Georgian, Norman, Italian, Regency, and more. The district includes the Atlanta History Center’s elegant Swan House, with lush grounds open to the public. The well-known Atlanta architectural firms of Hentz, Reid and Adler and Hentz, Reid, Adler and Shutze have impressive showings in the district. Many of the houses designed by these firms originally featured formal boxwood gardens, of which only a few remain today. Other noted Atlanta architectural firms working in Peachtree Heights Park were Cooper and Cooper, Pringle and Smith, and Tucker and Howell. Building in the district was substantially completed by 1940.

The residents of Peachtree Heights Park Historic District have been, and continue to be, prominent and influential figures in Atlanta’s history. The district retains a high degree of aesthetic and social integrity, and remains as desirable a destination today as it was a century earlier. The Peachtree Heights Park Historic District was listed in the National Register of Historic Places in 1980.