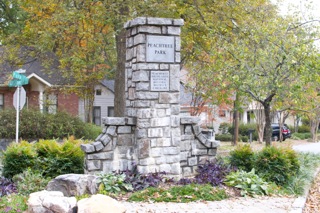 The Peachtree Highlands-Peachtree Park Historic District is a neighborhood of single-family houses and duplexes dating from the 1920s and 1930s, with some post-World War II development as well. The oldest section of the neighborhood, listed in the National Register of Historic Places in 1986, was known as Peachtree Highlands; today, the entire neighborhood identifies itself as Peachtree Park. The district is bounded by Piedmont Road to the west, Peachtree Road to the north, railroad and MARTA lines to the southeast, and Georgia 400 to the northeast. The entire neighborhood is thus surrounded by dense commercial development and major transportation arteries. It is no surprise, then, that Peachtree Park is often described as an island within the city.

Curvilinear streets, deep lot setbacks, and informal landscaping characterize Peachtree Park. Although there are no parks in the neighborhood, the district as a whole retains a park-like feel, thanks to the mature shade trees and relative lack of traffic. Common house types in the district include side-gabled cottages, English cottages, bungalows, American small houses, and ranch houses. Styles are varied, including such influences as Colonial Revival, Craftsman, and English Vernacular Revival. Historically, the houses in the neighborhood were modest in scale; many have had additions over the years. The quality of the houses’ original construction, many with attics and basements, offers excellent opportunities for expansion to accommodate growing families. 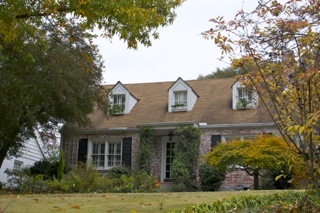 In 1913 and 1916, Atlanta entrepreneur W.M. McKenzie purchased the land on which the then-named Peachtree Highlands would be built, under the auspices of The McKenzie Trust. The earliest McKenzie Trust plats of Peachtree Highlands, dated 1913 and 1915, show the streets and lots laid out as they are today. Unlike many other Buckhead neighborhoods being developed around the same time, Peachtree Highlands was designed to appeal to working-class families. Although the houses were smaller in scale, the neighborhood shared many similarities with contemporary developments such as Garden Hills and Tuxedo Park. The first phase of development began after World War I, and local newspaper advertisements proclaimed of Peachtree Highlands: “If you ever intend to buy real estate in Atlanta, now is the time.” Phase I consisted of development along Highland Drive, Park Circle, Arc Way, and Martina Drive from Park Circle to Highland Drive. Phase II, along upper Martina Drive from Park Circle to Piedmont Road, began in 1927 and lasted until 1932, with many English Vernacular Revival style houses built during this period. The third and final phase, platted as the Peachtree Park subdivision, began in 1937 and continued after World War II.