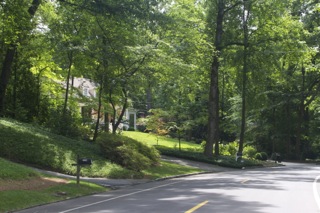 Brookhaven Historic District is an intact example of an early 20th century residential neighborhood, with development spanning three decades beginning in 1910. The district is bounded by Peachtree Street to the south and east, Peachtree-Dunwoody Road to the west, and Windsor Parkway to the north. Houses in the district are one- and two-story buildings finished in wood, brick, stucco, and, in a few instances, stone. A variety of house styles are represented, with the most prevalent being Colonial and Georgian Revival. Also present are Tudor Revival, Dutch Colonial Revival, Spanish Revival, American Small, and eclectic houses that incorporate multiple stylistic influences. Many houses are high style and were designed by prominent Atlanta architectural firms such as Hentz, Reid, and Adler, Pringle and Smith, and Edwards and Goodwyne, among others. The neighborhood features a curvilinear street pattern, picturesque landscaping, mature shade trees, and hilly terrain. The Capital City Country Club (originally called the Brookhaven Country Club) and golf course — including the distinctive 1927 Norman Revival clubhouse — anchor the district.

Brookhaven was developed from the property of Isham Stovall and Soloman Goodwin, two early landowners in the area. It is significant as Georgia’s earliest, and perhaps the Southeast’s earliest, planned golf club community. Earlier golf courses and country clubs exist in the state, but Brookhaven is the first example of suburban development planned and designed with a golf course as its central focus. The Brookhaven Country Club was laid out in 1911, and the golf course architect was Robert H. Barker, a golf pro from Long Island who also designed the Druid Hills Country Club in Atlanta. Barker had played in a 1911 tournament at Atlanta’s East Lake Country Club and may have been asked to design the Brookhaven course at this time. The present Capital City Country Clubhouse dates to 1927 and is the club’s second. The country club was originally incorporated in 1910 as the Brookhaven Country Club but was quickly sold to the Capital City Club, a social club whose members were influential Atlanta businessmen, for use as their country club — an easy exchange since many of the Capital City Club’s members lived in the area. 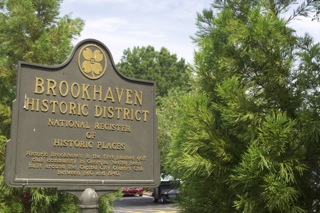 In addition to being an early example of golf course and country club design, Brookhaven Historic District and the Capital City Country Club have significance as important early examples of the historic recreational interests and social pursuits of Atlanta’s upper-middle and upper class white citizens between 1910 and 1941. Historically, residents of the neighborhood held such occupations as lawyers, upper-level businessmen, company presidents, and other professionals, and approximately 30% were members of the Capital City Club. While some additional housing development occurred in Brookhaven after World War II, this development comprises only 20% of the houses in the neighborhood. The district as a whole retrains high integrity and is representative of the lifestyle of an influential segment of Atlanta’s population in the early 20th century. Brookhaven Historic District was listed in the National Register of Historic Places in 1986.