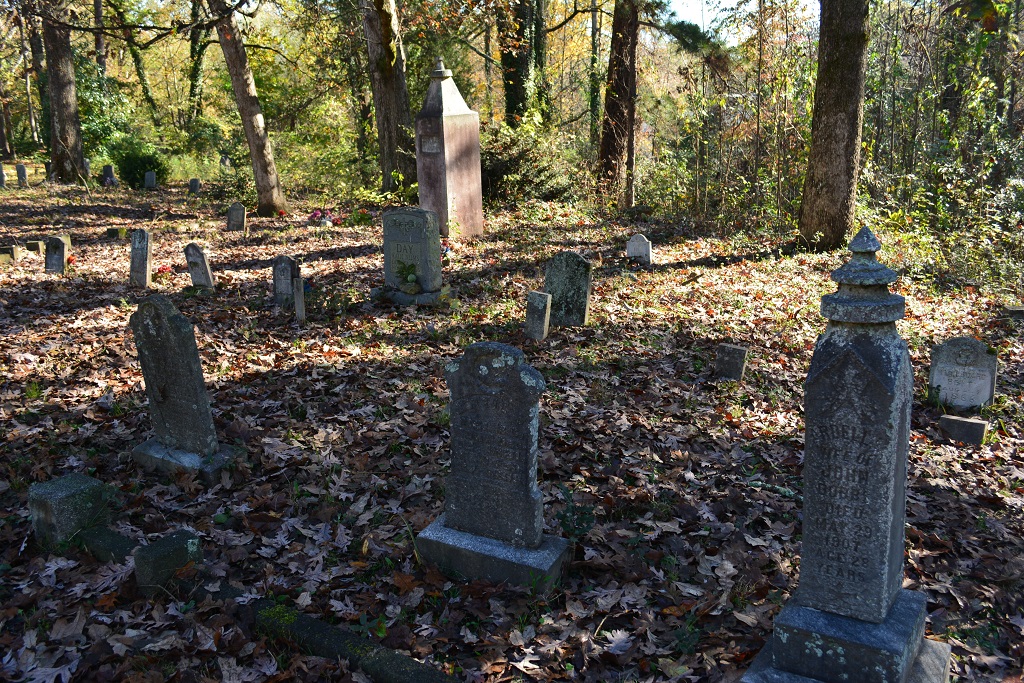 New Hope Cemetery is an important local example of a rural African-American cemetery. It is listed on the National Register of Historic Places with New Hope African Methodist Episcopal Church, which has served the black Buckhead community as an educational, social, and religious center since the late nineteenth century. Now surrounded by a mostly white, affluent residential area, the church is located at 3012 Arden Road. The 1.86-acre cemetery is located across the street from the church and contains hundreds of graves. The first documented burial, based on church history and oral tradition, was in 1889. Find A Grave documents 46 interments. There are also many unmarked graves at the site.

The New Hope congregation formed in 1869 and worshipped at the New Hope Camp Ground along Arden Road. According to Rev. Elizabeth Few, “New Hope truly was the site of one of the most widely known and well attended camp meetings throughout the South.” Camp meetings were an integral part of worship in the South in the nineteenth century, especially in African American communities. Campgrounds often became the site of permanent church buildings, which appears to have been the case with New Hope. Several years after the congregation formed, it was given land in the vicinity by a well-known Buckhead farmer. The National Register of Historic Places nomination form describes the acquisition of land:

“On May 29, 1872, James H. Smith, a white resident of the community of Buckhead … stipulated in his will that two parcels of his farmland were to be given for use as a church and school for “colored persons” — one acre for a schoolhouse and two acres for a church. He died eight days later and thus the congregation of what is now New Hope African Methodist Episcopal Church became the legal owners of the property on which their church and cemetery stand.”

James H. “Whispering” Smith is buried at nearby Harmony Grove Cemetery. The New Hope community believes that “Mr. Smith was inspired by God to conceive and execute such a kind and magnanimous act” such a short time before he died. During the 111th anniversary celebrations for the church in the spring of 1980, the congregation departed New Hope after Sunday morning service and led a procession several blocks to Harmony Grove Cemetery. There, they held a service of thanksgiving and placed a wreath on Mr. Smith’s grave.
The entrance to New Hope Cemetery has an ornamental wrought-iron gate and two stone pillars, placed in memory of deceased church member Oscar Turner. Turner was a Sergeant in

the U.S. Army and received the Bronze Star Medal. He died in 2001 and is buried in the cemetery. Government-issued military markers from World War II, the Korean War, and the Vietnam War are also present, and past research has indicated at least ten veterans are buried at New Hope. Others buried in the cemetery were members of the church or close family of members; family plots are sometimes demarcated by short concrete or brick retaining walls. Find A Grave indicates several family groupings, including Bailey, Hutchins, Nelms, Pace, and Smith. The layout of the cemetery is generally informal with minimal landscaping, including a variety of hardwood trees, flowers, and shrubs.
More information about the historic church building can be found on the Buckhead Heritage Historic Buildings page here.