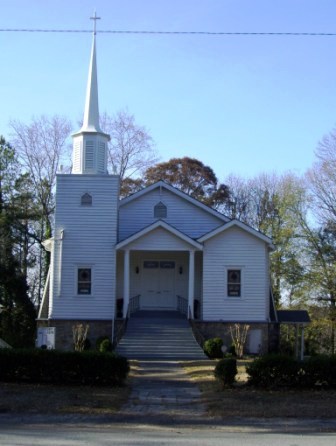 The New Hope African Methodist Episcopal Church is a modest wood-framed building on Arden Road surrounded by exclusive single-family residences. On its main façade, the church features a central front-gabled entrance portico that leads to the sanctuary. Meanwhile, a tower topped with a simple steeple and four small decorative urns stands to one side of the entryway. The church’s prominent granite foundation envelops a daylight basement.

The New Hope congregation has owned the property on Arden Road since 1872, when James H. Smith, a white Buckhead farmer, willed three acres of his property for use as a church and school for “colored persons.” The congregation subsequently built a tabernacle on the property which stood until 1965. The property’s original church building was built sometime prior to 1900.
Many of the original members of the New Hope congregation were recently emancipated slaves. During the late 19th century, they continued to work as farm laborers and servants for white families in the area. Most church members lived in small African American neighborhoods in the vicinity.
In 1927, the original church building on the property burned down. The current building’s basement was built the following year, while the new sanctuary was not completed until 1936. New Hope African Methodist Episcopal Church was listed on the National Register of Historic Places in 2009 along with the cemetery located across the road.
Sources:
Dunbar, Sarah. “New Hope: Buckhead, Atlanta Landmark.” Buckhead, Atlanta, 2 February 1978.
National Register of Historic Places Registration Form for New Hope African Methodist Episcopal Church and Cemetery.
Photo credit: Buckhead Heritage