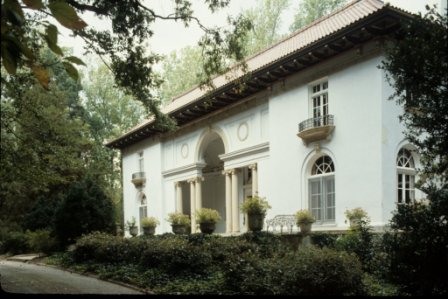 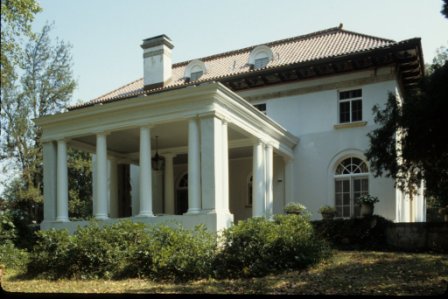 Villa Lamar is a two-story, Italian Renaissance style home perched atop a knoll overlooking West Paces Ferry Road. The stuccoed residence features a red tile roof and a Palladian style entrance loggia. A porte cochere extends from the home’s west elevation. Meanwhile, a solarium extends outward from the east side of the residence.

Villa Lamar was designed by nationally-known architect George O. Totten, Jr., of Washington, D.C., and built between 1911 and 1912. The residence is the only identified work of Totten in Georgia; Totten was known for designing many monumental federal buildings, including foreign embassies, in the capital city. William Bailey Lamar, who commissioned the residence in 1911, had served as a United States Congressman from 1903 to 1909 and was likely familiar with Totten’s work.
The Philadelphia firm of Meehan and Sons designed the property’s landscape in 1911, which included formal terraced gardens at the rear of the house.  In 1958, a majority of the estate’s original 200 acres was subdivided for the Kingswood development.
Villa Lamar was listed on the National Register of Historic Places in 1988 for its architectural significance.
Source:
National Register of Historic Places Registration Form for Villa Lamar.
Photo credit: Historic Preservation Division, Georgia DNR. For permission to use the above photographs, please contact the Historic Preservation Division.